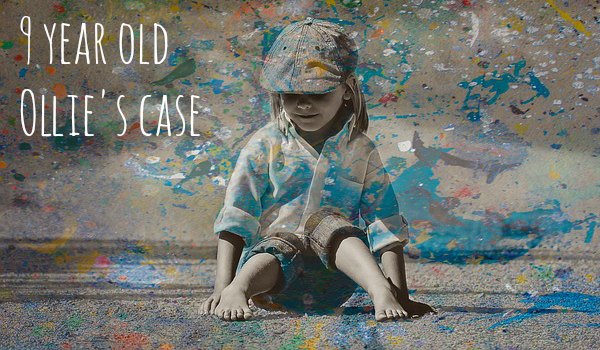 Ollie’s mum consulted me when he was nine years old.  He was suffering from a variety of symptoms including migraine headaches and nausea, but her greatest concern was over Ollie’s emotional distress.  He had a compulsion to wash his hands, which he needed to do many times a day, especially after touching the family pets, or surfaces in the house.  He had a fear of germs, and would become panicky and fearful when unwell, believing that he was going to die.

Ollie’s mum also described him as ‘manic and hyperactive’, and he could at times become very aggressive and ‘in your face’.  He would talk constantly, and had great difficulty with being on his own day or night, needing someone with him at all times.

Ollie also had difficulty sleeping and would become angry that he could not get to sleep until very late.  He would sometimes wake in the night screaming and shouting.

He is a very confident boy socially, and lacks inhibition.  He cares deeply about art and beauty, and loves to create art, as well as to act and perform.  He is passionate about nature and wildlife, and is devoted to the family pets.

Ollie was given several homeopathic remedies over a period of several months, and  he experienced a great improvement in his symptoms, with significantly less distress and handwashing, and much better sleep.  The remedy that helped him most significantly was Agaricus, which is just one of the medicines homeopaths prescribe to help with symptoms of anxiety, hyperactivity and sleeplessness in children.  Ollie continues to do well.

If you have a child who suffers from anxiety or insomnia, get in touch with me for a free 20 minute consultation to discuss how I can help.