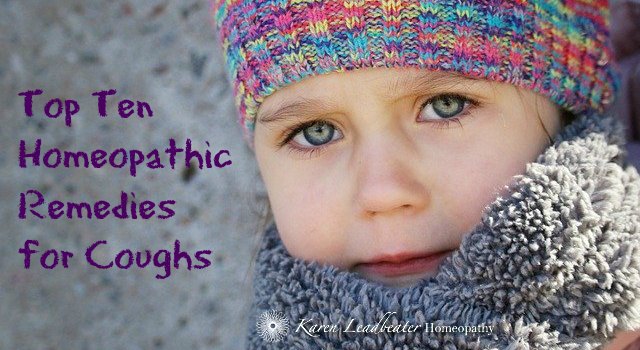 Coughs are among the most common conditions for which people seek homeopathic help.  Homeopathic remedies will often quickly help a simple acute cough, and home treatment can be effective with some guidance about what to look out for.  If you have a longer term respiratory condition such as asthma, or if you get recurrent coughs or respiratory infections, this will need professional constitutional care to determine the appropriate course of treatment for you.

Homeopathy works by matching the symptoms you are experiencing – including their unique ‘character’ – with the most suitable homeopathic medicine.  The right remedy match will stimulate a healing response quickly in an acute condition.  Thus regarding coughs, each remedy has the ability to produce – and also resolve – a cough of a particular character.  It is the peculiar, individual and distinctive aspects of your cough that are of greatest use in determining the correct remedy match.

For some basic information about self-treatment, including dosage, potency and repetition, you can download a copy of my free e-book My Top Ten Homeopathic Remedies.

Below is some further information about ten of the remedies for an acute cough which I use most frequently.  As always, if the person’s health is a cause for concern, do not delay seeking medical help.

Aconite is one of the main remedies for croup (a barking, rasping cough occurring in childhood that is often accompanied by breathing difficulties), and is typically needed in the early stages.  A cough that responds to Aconite will be worse at night – especially around midnight, dry in character, with a dry mouth and thirst, and shortness of breath.  The person affected will often feel anxious and restless.  Acute ailments such as cough, cold and earache, often come on after exposure to dry, cold wind, and will be sudden and violent in nature.

Ant tart is one of the main remedies for a mucusy, rattling cough, when there is difficulty in coughing up the mucus.  The chest sounds full of mucus, but with little to no ability to cough it up.  The person affected will often feel weak and drowsy, and wants to sit up with the cough, which can be accompanied by shortness of breath.  The cough is often worse around 4pm, or around 4am.

Bryonia is a well known homeopathic cough remedy, and will help in cases where its main characteristics are matched: dryness, and worse for movement.  A typical Bryonia cough is dry, hard and painful.  There is typically a dry mouth and great thirst for water, and dry chapped lips.  The cough is so painful that the person needs to hold their head or chest when they cough, and the typical headache is frontal, and with a bursting sensation.  The cough is aggravated by deep breathing, eating or talking.

Corallium rubrum is a remedy for violent, dry, hacking coughs which come in rapidly repeating bouts, like a ‘minute gun’.  The affected individual also feels markedly worse for cold, so much so that air feels noticeably cold on inhaling, and he will want to sleep with his head under the bedcovers as a result. Along with the cough, there may be a desire for sour or salty food, but eating sets off the cough immediately.

Drosera is is one of the main remedies for whooping cough, and has a distinctive character which makes it valuable in cough treatment in general.  It is prescribed for coughs which are characterised by incessant or violent bouts of coughing which end in retching or vomiting.  The cough is typically aggravated as soon as the individual lies down in bed, and is often worse from midnight through the early hours.  It may be accompanied by  cold sweats.  Bouts of coughing may make it difficult to breathe.  The cough may be deep, chesty and painful, forcing the person to hold their head or chest when coughing.  It is better for fresh air and during the day.

Ferrum phos is often needed in the early stages of inflammatory conditions, and although the symptoms tend not to be vivid, the cough is often characterised by stitching pains, and the mucus coughed up may be blood-streaked.  Ailments often come on after exposure to cold, but the symptoms are not sudden and violent (compare Aconite).  There may be hoarseness with the cough.

Phosphorus has a wide sphere of action in homeopathic treatment, and is often indicated in respiratory complaints.  The cough is typically a dry, persistent tickling cough, which is often worse in the evening or at night.  They will feel better for sitting up, and for cold drinks, and worse for lying on the left side.  One of the main characteristics of a Phosphorus cough is aggravation from change of temperature or weather – for example, going from a warm room outside into the cold air.  There may be pain and hoarseness in the larynx and throat, worse for coughing, and the mucus may be blood-streaked.

Pulsatilla is a remedy often used in acute ailments in childhood, where the picture matches.  The typical Pulsatilla cough is one which becomes dry in the evening and at night, and productive in the morning, with yellow or greenish mucus which is coughed up on waking.  The cough is worse for warmth, and in stuffy rooms, better in the fresh air.  It also tends to be worse when lying down to sleep, and the person will want company.  They may be weepy or moody and changeable with the symptoms.

Rumex is a remedy mainly used in the treatment of coughs, and has a distinctive character – the person who needs Rumex will be very sensitive to cold air.  A tickling in the throat is aggravated by inhaling cold air, and the cough may be continuous, only eased by covering the mouth.  The cough is aggravated by any change of air, and will often be accompanied by a raw, burning sensation in the larynx.

Spongia is a well known homeopathic cough remedy, and (like Aconite) is one of the main remedies for croup.  The Spongia cough has a characteristic barking, sawing sound, described in the literature as sounding like ‘sawing through a board’.  It is typically dry and suffocative, and comes on around midnight or in the early hours.  Hoarseness is also typical.  The cough is generally eased by warm food and drink.

Homeopathy can be very effective in chronic respiratory conditions such as asthma and chronic bronchitis, as well as the tendency to recurrent respiratory infections.  Get in touch with me here if you would like to have a chat about how I can help you.