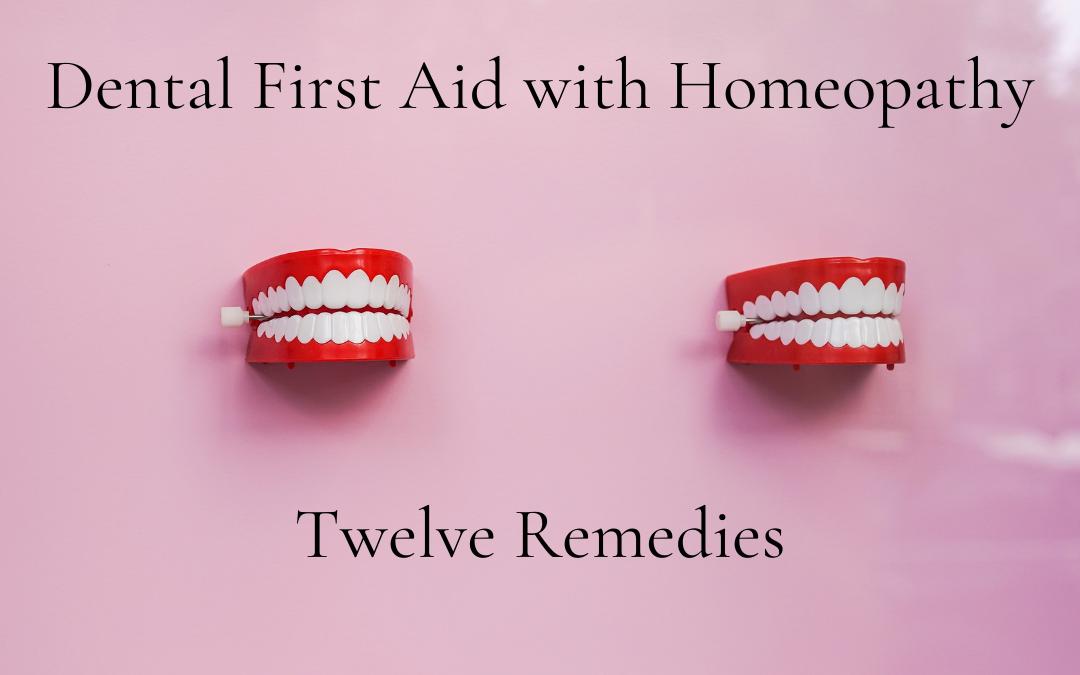 Homeopathy can provide surprisingly rapid relief in acute toothache, and promotes healing in dental infections and trauma, including after extraction or dental treatment.  The right remedy is the one that matches both the specific situation being treated, and your experience of the symptoms.  I have included brief information about a number of the remedies that may be helpful below.

Chronic longer term dental problems can improve significantly under professional homeopathic care, so it is worth bearing this in mind if you are prone to recurrent dental abscesses, gingivitis, teeth grinding, or deficient dental enamel, for example.

If you experience an acute toothache, it is important to see a dentist as soon as possible to establish the cause of the problem.  In the meantime, homeopathy can provide much needed pain relief in many cases.  Here are some of the remedies that can help, where the picture fits.

Plantago is a major first aid remedy for dental problems.  It is indicated in toothache with sensitivity to touch and cold, and swelling of cheeks.  There may be some relief from applying pressure to the affected area, including from eating.  Plantago tincture can also be applied directly to the affected area to provide topical relief.

Chamomilla is helpful in toothache where the pain is violent and unbearable.  The pain of toothache is felt especially at night, causing great distress and preventing sleep, and may be accompanied by swollen cheek or may radiate to the ears.  Chamomilla is well known in homeopathy for teething children, and will also be of great benefit in acute toothache in older children and adults where the picture matches.

Mag phos is effective in toothache with shooting, electric shock like pain, which is worse for cold things (eg ice cream or cold drinks) and better for warmth and warm applications.  Mag phos is sometimes referred to as the ‘homeopathic aspirin’ due to its ability to resolve acute neuralgic pain.  It will even provide effective relief in severe pain in decayed teeth, while you await an urgent dental appointment.

Coffea is an especially useful first aid remedy for toothache where the pain is worse for heat and better for cold, the reverse indication to Mag phos (for example, the person may obtain temporary relief from holding ice water in the mouth).  The character of the pain is shooting or tearing, and comes on in spasms.

Mercurius may be helpful in toothache in decayed teeth, especially where there is a putrid taste in the mouth and increased salivation.  Pain is worse for both heat and cold, and is typically worse at night, with pulsating or tearing pain.

Staphysagria is perhaps better known in first aid treatment for healing from episiotomy, lacerations and bladder infections/surgery.  However it is also an important remedy in dental problems.  It will be helpful in toothache where tenderness to touch is prominent.  The pain is also worse for cold drinks or cold air, but not worse for biting down on the affected tooth.  It is often indicated in toothache that comes on during menses or during pregnancy.

Nux vomica is a well known homeopathic remedy which is helpful in toothache with the following indications: the pain is worse for cold air and better for warm drinks, and worse for mental or physical exertion.  The pain is typically burning, stinging or shooting in character, and may radiate into the jaw, face or temples.  It may be accompanied by local swelling, and by marked irritability.

These are some of the remedies that will help after dental treatment, including extraction, and dental trauma (ie an injury where the teeth are affected).

Arnica is the first remedy to think of after any dental or surgical procedure.  Arnica is indicated where there is bruising, swelling and bleeding, and it will often slow or stop haemorrhage following dental extraction (see also Hamamelis, Erigeron, Millefolium).  Arnica may also be helpful after a blow to the teeth where the tooth becomes discoloured.  This is similar to a bruise, and Arnica given promptly can help the tooth to survive and restore its natural colour.

Millefolium is noted for profuse bleeding after dental extraction or other dental work.  It is also known as Yarrow, and colloquially called Soldier’s Wound Wort.  Millefolium is in the same plant family as Arnica, many of the remedies in this family are used homoeopathically and herbally as vulneraries or trauma remedies.  Several authors recommend a prophylactic dose to be taken before dental surgery.

Hamamelis is made from witch-hazel, and in homeopathic potency is especially useful where there is haemorrhage after dental extraction, especially where Arnica has been given but not stopped the bleeding.  Hamamelis is also used in any situation where there is bleeding after a blow or blunt trauma (eg nosebleed).

Hypericum is known as the ‘Arnica of the Nerves’ and has a strong affinity to areas of the body rich in nerves.  It is especially useful where there are sharp, shooting pains in the teeth or jaw following dental work.  Hypericum tincture can also be used to make a healing mouthwash.  Use half a teaspoon of tincture in a glass of cool boiled water.

Phosphorus is another remedy to consider for persistent bleeding after tooth extraction.  It is also the first remedy to think of for problems following anaesthesia for dental work.