Natural Relief for Chickenpox and Shingles 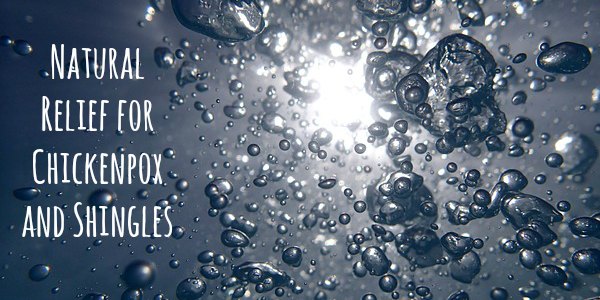 Chickenpox is an infection associated with the varicella-zoster virus.  Infections spreads by direct contact with spots, or by droplets on the breath.  Many children develop chickenpox before age 7, though some will get it later in life, in spite of early exposure.

One attack usually gives lifelong immunity.  However in some cases the virus remains in a dormant state and can be reactivated later, causing a further attack or in some cases developing into shingles later.

In chickenpox reddish pimples appear first, then develop into small fluid filled blisters.  Spots usually persist for up to 5 days, and may be intensely itchy.  According to the individual’s susceptibility, cases will vary from very mild and hardly noticeable to rashes which are widespread and painful, with fever and loss of appetite.  Complications are rare.

Keep the person as comfortable as possible by dressing in loose clothing and keeping the room cool.  Trim the child’s nails short and keep clean (to limit damage by scratching and avoid infecting spots).  You can put cotton socks or mitts on a baby’s hands to prevent scratching.  Encourage bed rest and sleep as much as possible.

Natural support for the healing process

Lukewarm baths can be helpful.  Try one or more of the following.  Put a good handful of porridge oats in a cotton sock, tie the end and place under running tap.  The used oaty sock is also great for dabbing on individual spots afterwards.  Chamomile baths are also good – place one or two chamomile tea bags under running water and leave in the bath (used tea bags are also good for dabbing on the spots).  One tablespoon of bicarbonate of soda and two drops of lavender oil in the bath.  Aloe vera gel or lavender oil can also help soothe itching topically.

Don’t attempt to bring down the fever.  Fever is the body’s intelligent response to the infection, and will ‘burn it up’ and shorten its duration.

Do supplement with vitamin C (or give vitamin C rich foods) to support the immune system.

Use your parental instinct and seek professional advice if you are concerned about your child’s response to chickenpox.

Homeopathy will help in cases where the itching is intense and help the body resolve more severe cases as promptly as possible.  There are a number of possible remedies.  Try the one which matches your child’s symptoms best.  If it doesn’t help quickly you are welcome to give me a call – I might be able to suggest a more suitable remedy for you.

Rhus tox – this is the first remedy to think of in chickenpox.  Intense itching is the main symptom.  Will often relieve the itch and shorten the illness.

Sulphur – can look similar to Rhus tox, with intense itching and no reduction in thirst or appetite.

Ant tart – this remedy will bring out the rash in cases where the child is unwell but the rash is slow to appear.  They will often be drowsy and feverish, and there may be an associated cough.

Belladonna – drowsy, flushed and feverish with the chickenpox, they may also have a headache.

Merc – useful in cases where the blisters discharge pus.

In very severe cases homeopaths will sometimes prescribe the nosode Variolinum, but this would need to be prescribed by a homeopath rather than self-administered.

Shingles is caused by the same virus that causes chickenpox, and lies dormant in the body until such time as it is reactivated.  This occurs when immunity is lowered, which can happen for a number of possible reasons, including emotional stress and depletion from recent illness. A large proportion of those who develop shingles are over 60, but it can develop in children or adults at any age.

Shingles typically causes a painful rash on one side of the face, chest or abdomen.  If the virus is reactivated in the trigeminal nerve it can also affect the eye area, causing a rash around the eye, and sometimes conjunctivitis and vision problems.  An episode may last for up to four weeks, and may be accompanied by headaches, fever, and itching burning or stabbing pain in the affected area.

Some people develop complications from shingles.  The most common is post herpetic neuralgia, which is persistent nerve pain at the site of the previous infection, which can go on for months or years.

There is some evidence that nutritional support can help to shorten the duration of an episode of shingles.  The amino acids arginine and lysine are found in many of the protein foods we eat.  The herpes zoster (shingles) virus makes use of arginine to help it replicate in the body’s cells during an outbreak, and lysine has been shown to block arginine’s activity.  Thus we can support the body’s prompt recovery by reducing arginine rich foods (these include nuts, coconut, brown rice, peanut butter, raisins, tomatoes, blackberries and grapes), and increasing lysine rich foods (these include fish, chicken, eggs, dairy, brewer’s yeast, among others) temporarily during the illness.

In my experience homeopathy can make a significant contribution to recovery from shingles, and in many cases can help to resolve post herpetic neuralgia, even in long standing cases.  There are many possible remedies, and it is advisable to see a homeopath for a professional assessment.  In the first instance, if the itching is intense, with a predominantly left sided vesicular rash, then Rhus tox will usually provide some relief.

Some people find that the rash of chickenpox or shingles leaves scars.  The following oils can help topically to reduce the appearance of scarring once the infection is past: rosehip, Calendula, wheatgerm.  Raw honey may also be helpful.