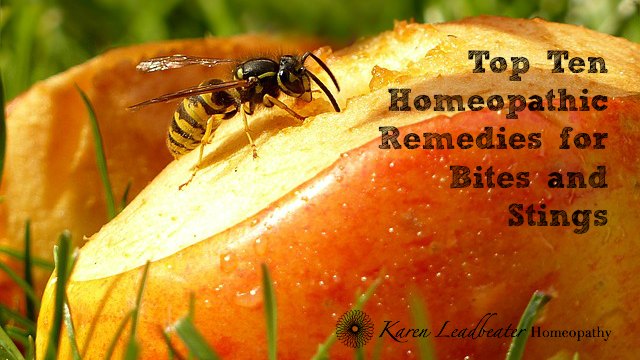 Homeopathy has an excellent track record in treating chronic health problems, and many people are also aware of its effectiveness in acute and first aid situations.  But did you know that a well matched remedy can reduce pain, itching and swelling rapidly in cases of stings and bites from insects?  It is important to select the best remedy match to your symptoms, including the appearance of the affected area, and the subjective experience of the person affected.  If you or any of your family members tend to react badly to stings and bites, it is advisable to have a kit of suitable homeopathic remedies at hand.  Helios Homeopathic Pharmacy in the UK stock a good range of first aid remedy kits.

These are some of the main remedies which may be indicated:

Arnica – bear in mind Arnica for bites and stings where there is a bruised soreness in the affected parts, with aggravation from pressure.  There may be extensive bruising to the area.

Cedron – this remedy is made from the plant commonly known as rattlesnake bean, and has a reputation for antidoting snake bites and the stings of poisonous insects.  The pain is typically burning and neuralgic in character.

Carb-ac – is a less well known remedy, which has an important place in emergency medicine.  It is used for anaphylaxis following bee and other insect stings, with characteristic swelling of the face and tongue.  I recommend to my clients who are especially susceptible to insect stings that they keep a small kit of remedies in their bag alongside their Epipen, and this would include Carb-ac and Apis, among others.

Grindelia – the tincture applied topically is noted as a useful treatment for poison ivy, and the remedy is also used for insect stings which result in intense itching and burning.

As always, if there is any cause for concern following an insect sting, do not delay in seeking urgent medical care.

For further information on giving the remedies, potency choice, and how to self-prescribe for first aid, see my free e-book ‘My Top Ten Homeopathic Remedies’.